With this volume, Gansell, Shafer, and their expert contributors confront canons, as established icons of culture, and ask how they come to be, of what use they are today, and whether they might transform or disintegrate in the future. In particular, this book investigates the ancient Near Eastern canon (Hammurabi’s Code, the gates of Babylon, the biblical sites of Ur and Nineveh…) from academic and native, Middle Eastern perspectives. Ultimately, it proposes to expand and transform the canon from a colonial artifact into a global tool for sharing, celebrating, and preserving the region’s diverse cultural heritage. We hope that this book offers not only seminal academic papers, but hope and a path to peace between people and cultures.

Technologies
Chapter 10: How Ancient and Modern Memory Shapes the Past: A Canon of Assyrian Memory Davide Nadali
Chapter 11: Museums as Vehicles for Defining Artistic Canons: The Case of the Ancient Near East in the British Museum Paul Collins
Chapter 12: Beyond the Canon: The Future of the Past in Museum Exhibitions of Ancient Egyptian and Near Eastern Art Rachel P. Kreiter
Chapter 13: The Ancient Near Eastern Canon in the University Classroom, and Beyond: My Colleagues Speak Ann Shafer

New Book: Testing the Canon of Ancient Near Eastern Art and Archaeology 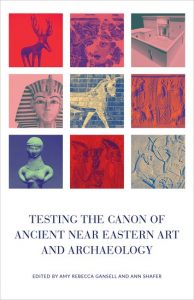 New Book: Testing the Canon of Ancient Near Eastern Art and Archaeology

Also available for Kindle and Nook